Why do so many today celebrities follow Scientology? The reason for this dates back to 1955. In 1955, Hubbard published an article titled “Project Celebrity” in the Scientology Ability newsletter. The article listed out 63 well-known celebrities including athletes, actors, artists, writers, and singers including Walt Disney, Ernest Hemmingway, and Pablo Picasso. This list was known as the “quarry.” Hubbard requested current followers to bring these celebrities in for auditing. Recruiting celebrities would help spread Scientology, just as how businesses today use celebrities in commercials to increase their sales. Hubbard also offered a reward for this:

“If you bring one of them home you will get a small plaque as your reward.” – Hubbard, Ability, 1955.

Celebrities themselves were also given incentives to join. They were given free courses, could advance quicker in the hierarchy, and could attend special churches known as “celebrity centers.” Today, the appeal to celebrities still stands. They are given VIP treatment similar to those in Las Vegas. They can also afford the more “advanced” auditing sessions. Being a part of Scientology makes celebrities feel more elite and affluent. Instead of following a religion of common people such as Catholicism, they are following a religion that is for the “higher class.” In reality, this was just another smart marketing scheme, just like the “free stress test.”

Scientology has a hierarchy of followers. A “clear” is someone who understands the basics of Scientology. They supposedly have freed their mind from unwanted emotions and trauma. They have rid themselves of the “reactive” part of the mind.

The next level after clear is Operating Thetan or OT. Hubbard described this stage as” knowing and willing cause over life, thought, matter, energy, space, and time (MEST).” There are eight known levels of OT, and possibly more than that. At OT III, you lean the “secrets of the universe.” To rise in levels, you must pay fees, which appeals to celebrities. Actors such as Tom Cruise are Kristie Alley are OT VII.

In 1995, the Scientology “secrets of the universe” were published by a formal member. They claim that 75 million years ago, an evil warlord named Xenu controlled 76% of the planets, but they were overpopulated. So, Xenu transported 13.5 trillion beings to Earth, where they were killed in volcanoes. Their souls were then caught in electronic traps in the atmosphere where they were implanted with false ideas about Christianity. These souls were then born as humans but are still trapped. The goal of Scientology is to wake peole up and save them from this trap. This story is so ridiculous that even South Park (tv show) made fun of them. 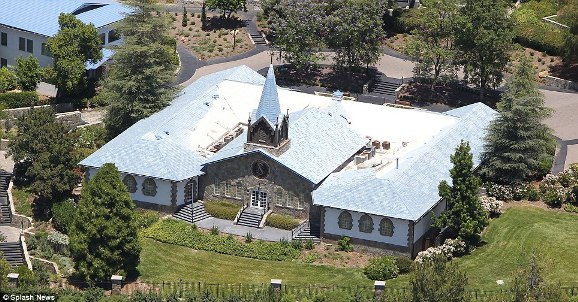 The international headquarters of Scientology is located on a 500 acre parcel of land in unincorporated Riverside, California (see picture above). It is known as Gold Base. This is where Golden Era Productions makes Scientology’s videos, training films, E-meters, and CDs. The property has a King Arthurish round table, a three mast rudderless clipper ship, pool with mermaid figurines, corporate suites, an estate house known as the Castle, and a carriage house building known as the Tavern.