The Star of Bethlehem

Revelation 12:1 – And a great sign was seen in the heaven, a woman arrayed with the sun, and the moon under her feet, and upon her head a crown of twelve stars, (YLT)

On June 17, 2 B.C., a spectacular event occurred. The planet of Jupiter (the King planet) aligns with the planet of Venus (the mother planet). They were seperated by only 26.2 arcseconds which is about 0.436 degrees. This also occurred closely to the star Regulus (meaning the Little King), in the constellation of Leo (meaning lion, the animal of Judah, whom Christ was born under). This would have produced what looked to be an extremely bright star. How bright? To give you an idea, Jupiter and Venus were very close (about 3 degrees apart) in March 2012. Here are some pictures: 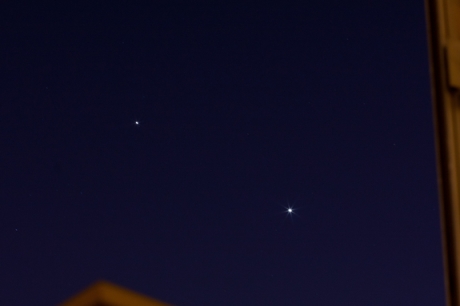 So the alignment of Jupiter and Venus is what the Magi saw. In Matthew 2:2, the Magi called Jesus the “king of the Jews.” This is because the Magi associated Jupiter with the birth of kings and Regulus means “little king.” Therefore, their interpretation makes sense.

In Matthew 2:9, the Bible describes that the star stopped or stood over the birthplace of Christ. What does this mean? How can a star stop? The answer is retrograde motion. Because the Earth itself moves, the planets have strange patterens from the Earth’s view. From the Earth’s view, Jupiter “stops” and reverses course on 12/25/2 B.C. Matthew says it was at this time that the Magi arrived to see Jesus.

Our final clue is in Luke:

Luke 3:23 – And Jesus himself was beginning to be about thirty years of age, being, as was supposed, son of Joseph, (YLT)

With all this evidence, we can come to the conclusion the Jesus was born in June 2 B.C. It could not have been too far from June 17, because this was the date of the star. Also, by December 25, Jesus was already an infant because he was no longer in the manger, and the Magi came to visit Him. God planned this from the day He created the universe. He had to know the exact date of Jesus’ birth, because the movements of the planets are like a clock. Venus and Saturn align exactly as God planned.