Pisces
Hebrew: Dagim, “the fishes”
Egyptian: Pi-cot Orion, “the fishes of Him who comes”
Syriac: Nuno, “lengthened out” 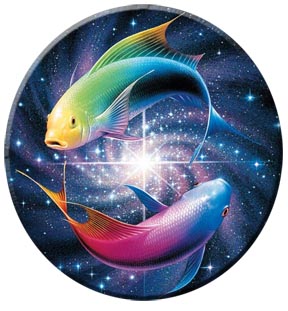 Stone: chrystolite, he who binds, who holds

John 21:6 – He said to them, Cast the net on the right side of the boat, and you will find some. So they cast it, and now they were not able to haul it in, because of the quantity of fish. (ESV)

The myth behind this sign is that Venus and Cupid were on the banks of the Euphrates, when a giant monster named Cetus appeared. To save themselves, they dived into the river, and changed into fishes. The figure of Pisces consists of these two large fishes, one headed to the North Pole, and the other headed towards the Sun. Therefore, this figure is associated with evil, captivity, and hiding from the enemy. In the Old Testament, these fishes can represent Israel and Judah. Israel was captured by the Assyrians, and Judah was captured by the Babylonians. In the New Testament, the two fishes can represent the Church and the Overcomers. Although the Church may seem to be losing to evil, at one point it will overcome evil and triumph.

Return from Pisces to Zodiac