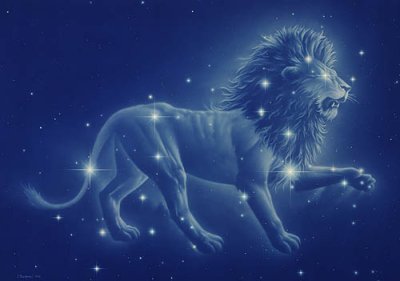 Stars
1. Regulus – the Little King, treading under foot
2. Denebola – the Judge, the Lord who comes
3. Al Giebha – the exaltation
4. Minchhir al Asad – the punishing, tearing of the lion
5. Deneb Aleced – the judge comes who seizes
6. All Dafera – the enemy put down

Stone: amethyst, he that destroys


Genesis 49:9-10 – Judah is a lion’s cub; from the prey, my son, you have gone up. He stopped down; he crouched as a lion and as a lioness; who dares rouse him? The scepter shall not depart from Judah, nor the ruler’s staff from between his feet, until tribute comes to him; and to him shall be the obedience of the peoples. (ESV)

Leo is a figure of a great lion. His feet are over the head of Hydra, the old serpent, and is about to crush it. (Gen. 3:15) According to Genesis 49, the lion is the symbol of the tribe of Judah. It also says that the ruler is at the lion’s feet. The star Regulus, is at the foot of the constellation Leo, and means the little king. Therefore, Leo represents the birth of Jesus. I will discuss this in more detail in another article.

Return from Leo to Zodiac