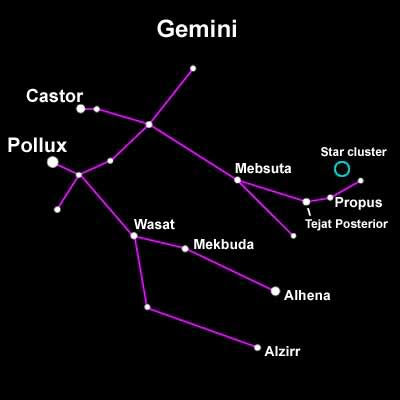 Stone: chrysoprasus, they who are united


Acts 28:11 – After three months we put out to sea in a ship that had wintered in the island – it was an Alexandrian ship with the figurehead of the twin gods Castor and Pollux. (NIV)

Ephesians 5:31-32 – Therefore a man shall leave his father and mother and hold fast to his wife, and the two shall become one flesh. This mystery is profound, and I am saying that it refers to Christ and the church (ESV)

Gemini is an image of two figures, one holding a club, and the other holding a harp in one hand, and a bow and arrow in the other. The Latins called them Castor and Pollux as seen in Acts. The Greeks called them Apollo and Hercules. The Egyptians pictures them as a man and a woman. A man and a woman best fit with the other constellations. This also matches the union of Jesus and the Church, which is the Bride of Christ. This is seen in Ephesians. Marriage between a man and a woman is meant to teach us about the more spiritual marriage between Christ and the Church. A true marriage should bring a couple closer to God and make them more holy.

Return from Gemini to Zodiac